Start a Wiki
Moby the Robot is an orange-sepia toned robot. His mom's name may be Henriette Da Vinci according to episode 100 when they reveal that Leonardo Da Vinci is possibly Moby's biological father. Tim, his best friend, answers important questions in BrainPOP episodes as well as Cassie and Rita. He is an avid movie director and operates the First National Bank of Moby. He loves to do risky stuff (like break museum rules or ride a bike recklessly), but also worries too much, especially if it concerns about viruses.

He doesn't want to answer questions about his ancestry, as it was shown in Writing Process, Geologic Time, and Outer Solar System. It's possible he is an alien robot because he repeatedly claims he's from another planet. He first met Tim in a giant smoking crater which could mean he got to Earth by asteroid or comet, as implied in the movie Writing Process. It is also possible he came to Earth in a rocket during the early Stone Age and lived in his rocket until it exploded thus making the crater. The movie Geologic Time has evidence of him next to a rocket on cave paintings. In "Citing Sources", Moby was revealed to be the leader of a robot rebel force with plans to take over the planet.

It was hinted that he was built by Leonardo da Vinci, although this seems more like a joke, as Tim says "Oh no way!".

He hates being dismantled as in Binary when Tim dismantles one of his lights to show off-0 on-1. Moby pulls Tim's arm while pushing on Tim's leg and Tim promises "not to take anything off him again".

Moby is a large automated mechanical orange-colored cartoon automaton weighing 500 pounds. He is 183 centimeters tall and is constructed entirely out of iron, steel, and tin.

His eyes are missing an iris and they are oval-shaped. His mouth is a dotted line and he has gold disks on the sides of his head for ears. His arms and legs curve and can extend in length. Inside of him is a bunch of machines and gears giving him powers. He looks like he is wearing boots and gloves and he has 3 lights on his chest.

Moby can't speak so the only way he talks is the beeping of his chest lights blinking. Moby can speak in his speech function in the video "Etymology". 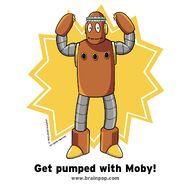 Tim, Cassie, and Moby in Basketball.

Moby with his best friend Tim in Conducting an Interview. 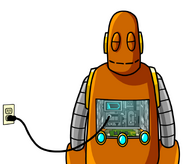 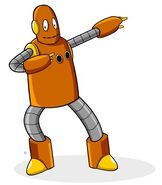 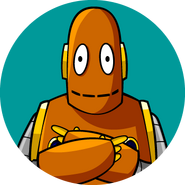 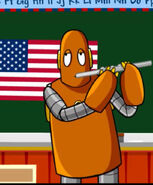 Moby playing the flute in U.S symbols
Add a photo to this gallery
Retrieved from "https://brainpop.fandom.com/wiki/Moby_Calrissian?oldid=35550"
Community content is available under CC-BY-SA unless otherwise noted.